OSXFUSE allows you to extend Mac OS X’s native file handling capabilities via third-party file systems. It is a successor to MacFUSE, which is no longer being maintained.

As a user, installing the OSXFUSE software package will let you use any third-party file system written atop OSXFUSE or MacFUSE, if you choose to install the MacFUSE compatibility layer.

As a developer you can use the OSXFUSE SDK to write numerous types of file systems as regular user space programs. The content of these file systems can come from anywhere: from the local disk, from across the network, from memory, or any other combination of sources.
This package will install the runtime and development components of OSXFUSE. Please note that no OSXFUSE-based file systems are included in this package.
WHAT’S NEW
Version 2.5.4:
New Features
Fixes
REQUIREMENTS
Intel/PPC, Mac OS X 10.5 or later
ScreenShots : 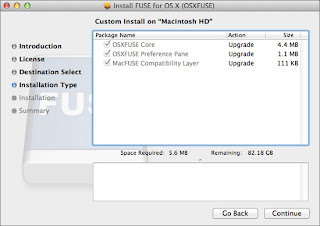